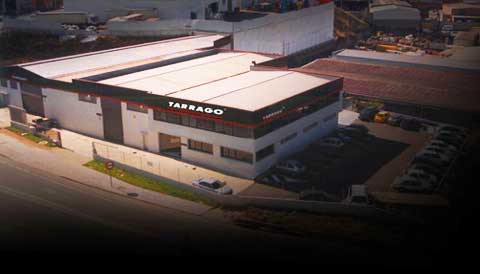 Tarrago Brands International is a company that manufactures and markets products for the care and shoe repair. It was founded in 1940 and in 2008 became part of the French group ALMA. Currently the company headquarters is located in Manresa (Barcelona, Spain).

The company was founded in 1940 under the name of Productos Tarrago. In its origins, the company was engaged in the manufacture of dyes for fabric for household use. The fabric sector had a strong presence in the region of Manresa since the nineteenth century. In the 60's, at the time when the crisis affected the fabric industry in Catalonia, the company shifted toward commercializing products for the repair and shoe care. During this period, they developed the Tarrago Universal Dye, the first water-based product that allowed to change the color of leather, even from white to black, and that is still being sold. This invention revolutionized the footwear industry. Because of its great success, it became the spearhead for national and international expansion of the company. From the 80, Tarrago products began to develop a range of formulations and specific accessories for the proper care and repair of all types of footwear: mountain, sports, children’s shoes, horse riding, professional and industrial. The presence of its products in over 50 countries, in addition to opening a U.S. subsidiary, Tarrago USA Inc., earned Tarrago obtaining the Products Internationalization Award 2005 of the Commerce Chamber of Manresa (Spain).

In 2008, Productos Tarragó was acquired by the French business group Alma. Alma is an European family business holding group of companies. It owns also the company Avel, located in Magnac Lavalette (France), which produces high quality products for leather and footwear, known globally under the Saphir and Medaille d'Or brands names. The integration of Productos Tarragó in Alma group was part of a strategy to achieve a greater international projection. The result of this strategy in 2009 leaned onto renaming the company as Tarrago Brands International, SL., which is the current name of the company. The new group also completed a global restructuration, reorganization and technical modernization of the company, that has allowed manufacturing its products entirely conducted from its headquarters in Manresa, and exports increasing from 25% to 75%. Tarrago Brands International logo is a reflection of the evolution of the graphic design, applied to the industrial sector in the last seven decades. The initial "seal" format type has moved to a more dynamic and colorful graphics with the introduction of the legend "The Leather Care", which reflects the company's global vocation in its present stage.

Currently, Tarrago Brands International is a company with 25 employees and 6 million euros of annual sales. It has facilities of 6,000 square meters, 50% of which are aimed at manufacturing and other logistics activities. The company makes 70% of the sales of its products through exclusive distributors in 54 countries on five continents.

Tarrago Brands International has its R & D department in its own center of Manresa (Barcelona, Spain), where they develop the formulas of their products. Innovation efforts are based on the premise of achieving safe, effective and high quality formulations, tailored to customer demands and to the most stringent current regulations of the chemical industry, such as the Reach safety materials program, VOC international consumer protection regulations and GHS new labeling and data sheets rules.